What is the difference between a Wurlitzer 200 and 200A?

What is the difference between a Wurlitzer 200 and 200A?

The Wurlitzer 200 and 200A are two of the most common Wurlitzer models, and were produced from 1968 through around 1982. For most practical applications all of the “200 series” instruments (200, 203, 206, 214A, etc) are nearly identical instruments, but taking a closer look at these models there are changes throughout the years that differentiates them from one another.

The tonal differences between a 200 and 200A are pretty subtle, but for the tone-chaser these subtle differences may just give player that little extra bit of vibe or inspiration that they desire. Because of their similar cosmetic design, it is common for people to mistake a 200 for a 200A and vise versa. Even when taking a closer look under the hood, their action assemblies and the reeds that produce their sound are identical, leaving only a few distinguishing characteristics to look and listen for.

Quick Identifiers: Even though the cosmetics of each instrument can be differentiated from one another in some cases noted below. There were a few color options that were only available on the 200 or 200A that can quickly identify the exact model. Both 200 and 200A pianos were available in Black and Beige, but only the 200 was available in Red or Forest Green, and Avocado Green was only offered on the 200A period. Another quick distinguishing cosmetic note is that the Wurlitzer emblem on the back of the keyboard from the player was only on the last few years of the 200A.

When the 200 was first introduced in 1968 its amplifier was an early transistor circuit with a straightforward design. Within just a few years, the amplifier would be redesigned a few times with a series of minor improvements that attempt to reduce noise and distortion in the amplifier. However, these 200 amplifiers are still very prone to noise and distortion that is less present in the later 200A design.

The colour or vibe of the 200 is slightly darker and some what swampier than the later 200A, which has a brighter and more articulate tone (particularly in the later years). These tonal difference happen because of a few changes in the reed construction, amplifier, and the speakers used.

A large part of the 200’s vibe comes from the Alnico speakers, which tend to have smoother treble response, which some players prefer to mic instead of running through a guitar amplifier or direct. This tends to give a more “vintage” sounding tone than the more articulate/barkier tone of running it through the aux. output. 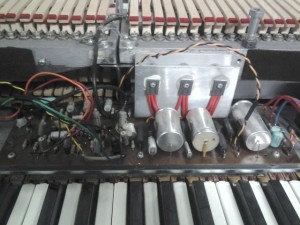 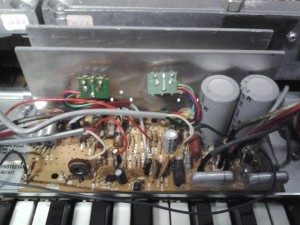 The transition from 200 to 200A happened in late 1974 or early 1975 and at that time the only change was the amplifier. The alnico speakers were still used for a brief period before another brief period of square ceramic magnet speakers, followed by the most common round ceramic magnets. With the introduction of the square magnet speakers, Wurlitzer moved the mounting of the speakers to the plastic lid of the piano.

Quick 200A Identifier: The mounting pins on the lid of the Wurlitzer are one of the fastest ways to identify most 200A’s. This marks the transition from the early Alnico speakers that happened very early in 200A production. 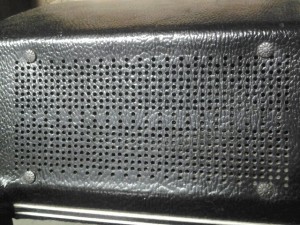 Mounting Pins for the 200A’s Speakers

The most notable improvement of the 200A amplifier is that it is naturally less susceptible to noise and interference the former 200 amplifier due to three new factors. First, there was an additional ground shield placed much closer to the Wurltizer’s electrostatic pickup–which is a must have upgrade for all 200’s! Next, the preamplifier of the Wurltzer was seperated onto its own PCB and mounted on the reed bar, increasing the distance between the preamp and the amplifier to reduce interference from the power amp’s electromagnetic field. Last, the AC wiring from the power source to the transformer was placed within a strip aluminum tubing that shielded the amplifier from the electromagnetic field produced by the AC current running to the power transformer behind the amplifier. (Though the placement of the AC power switch still requires the PT mains to run extremely close to the amplifier… And they didn’t twist their AC runs, which is another technical flaw that went overlooked…)

From a tone-chasing standpoint, the difference in the amplifier is pretty subtle. The amplifier was a little more clear, with a lower noise floor than the 200, but it was still a pretty noisy amplifier on its own. We credit majority of the tonal differences arise from changes in the speakers and subtle changes in the reed construction that happened throughout the following years.

Which one is better???

The preference of a Wurlitzer 200 to 200A is very subjective and depends on the player. There are excellent examples of all 200-series pianos and in the end we would always suggest evaluating the instrument first on it’s own condition rather than on the year/model-name itself. If you are considering an unserviced “stock” model then there may be some advantages of the improvements of the 200A that are worth considering. On the other hand, if you are purchasing one of our fully restored electric pianos, we restore all 200 with noise reducing techniques that will make the electronic differences negligible between the two models.

Final Note on “Muddy” Tone: Servicing an amplifier properly can go a long way to increase the clarity of the amplifier. However, it is also common for muddy tone to be the result of poor action regulation. Getting the action setup in a Wurlitzer is the best way to make sure that it is playing to it’s full dynamic and articulate range, which will bring out a lot more of the Wurli tone that we all know and love!