Check out this little orange beauty from the Wilco Loft! This is the 44 note Wurlitzer 106P Student Piano. Have a look: 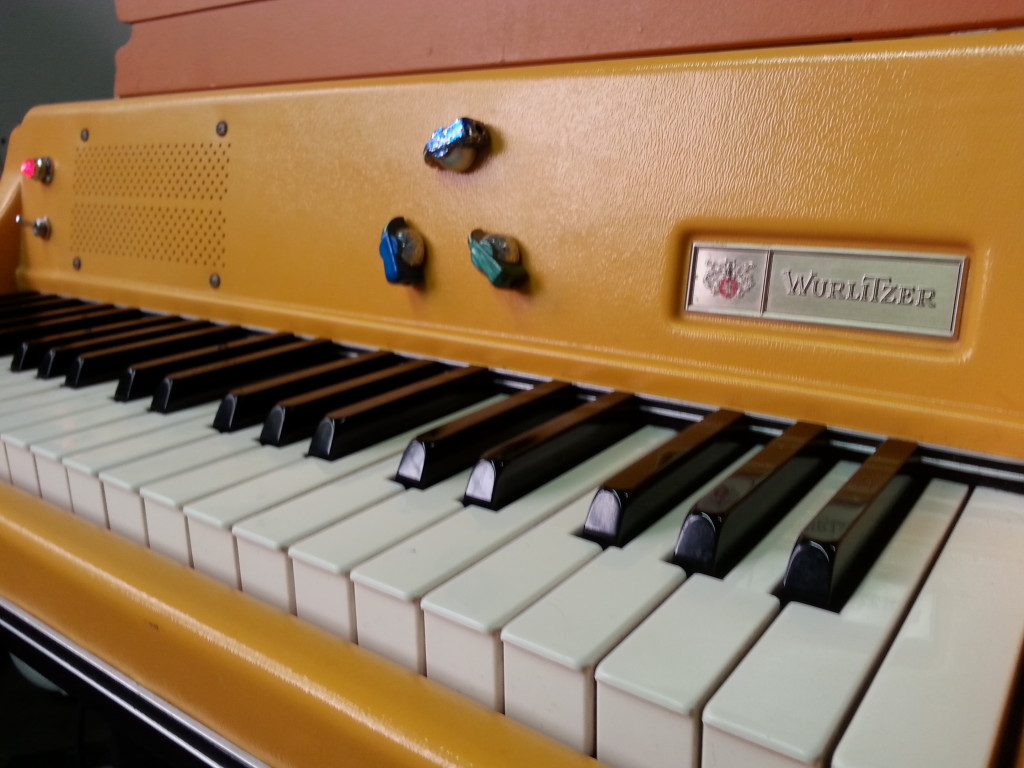 The 106P’s were produced around the same time as the 200 era pianos and were sold to classrooms in a set of eight pianos mounted onto a single folding frame that allowed them to be stored without taking up too much floor space. All of the controls were mounted in the middle of the folding frame where a single “mother” amplifier that distributed the power and other controls for the individual pianos. On their own, the pianos cannot be simply removed from the set without expert modification to make them work properly. 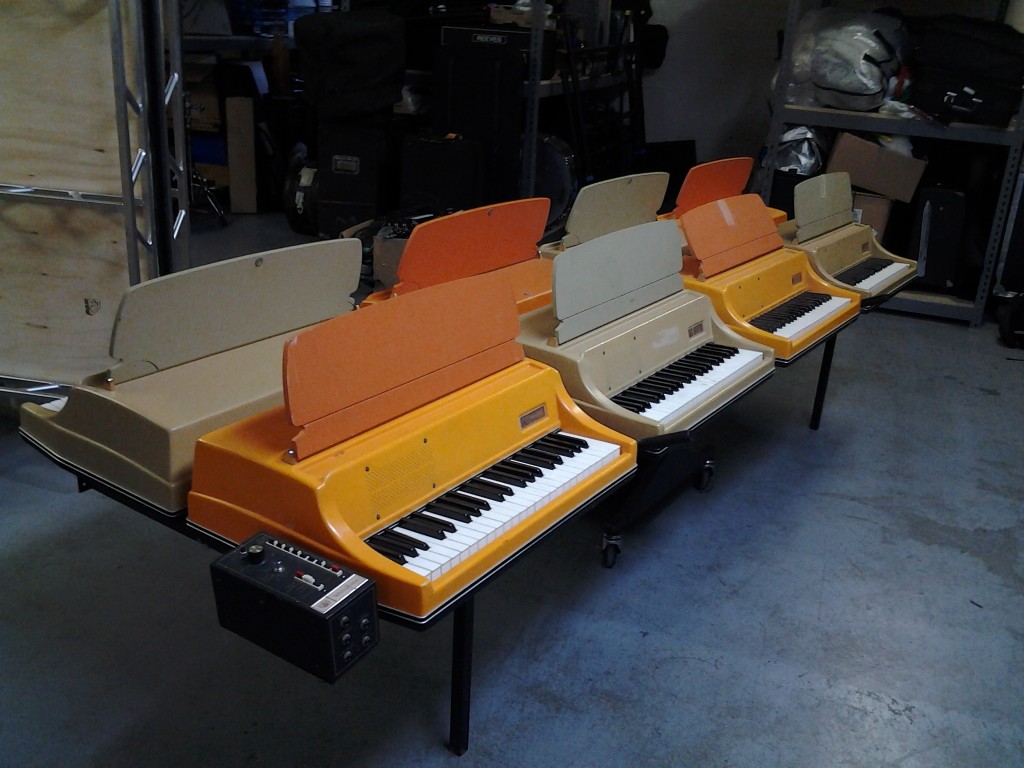 Once unfolded the pianos only sit a few feet off of the ground and must have been intended for elementary school use.

A side mounted panel the instructor can control various basic functions of the classroom set. 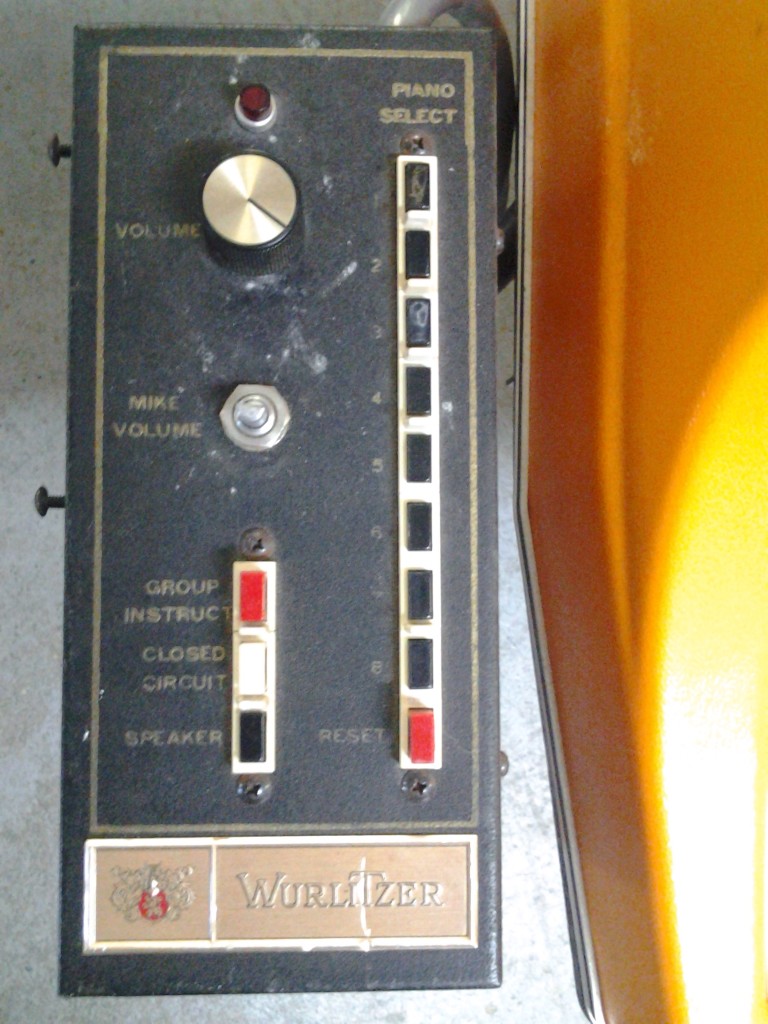 Under the orange hood of the 106 the action assembly is nearly identical to the 200 series pianos with a few minor differences due to the 44 note reed bar that is unique to the 106. And not just because it is the only Wurlitzer model without 64 notes. Each of the reeds are mounted to a single reed bar that spans the entire piano which is also much lighter than any other Wurlitzer reed bar. The 200 series, and the previous 140/145 series, pianos have two 32 note reed bars split down the middle which severely limits the resonance transferred from one sustaining reed to another located on the other on the other reed bar. Having all of the reeds mounted on the same reed bar allows for more harmonics to be transferred between sustained notes which is one of the most wonderful sonic aspects of this instrument. 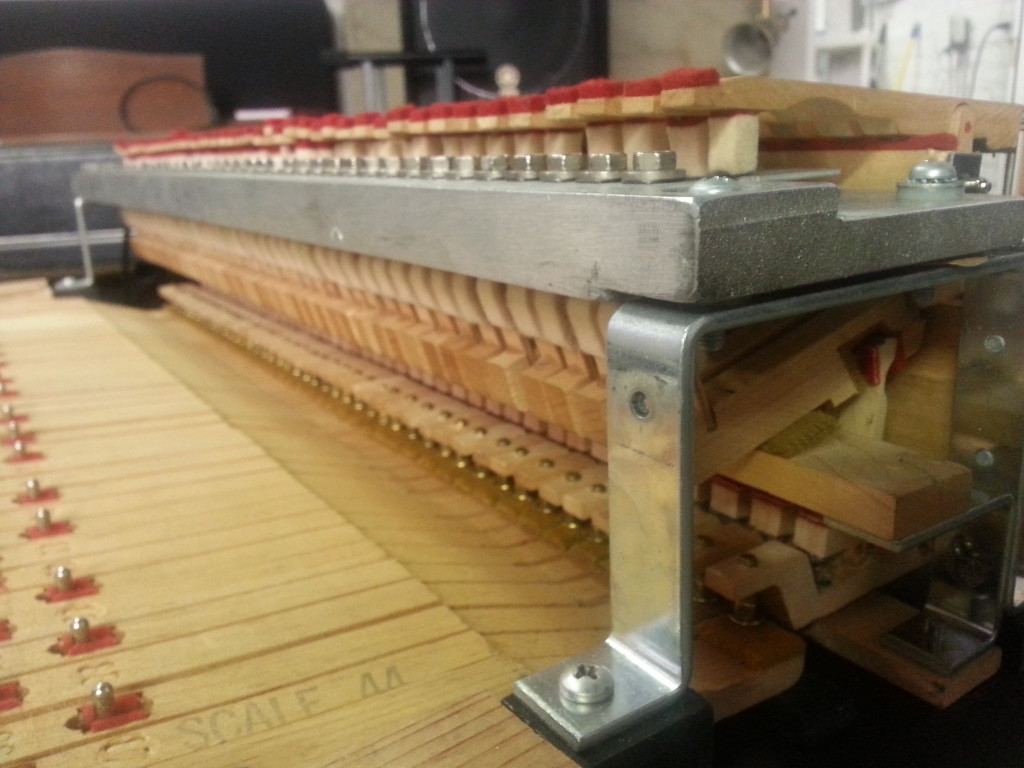 The other difference is that without serious modification these pianos have no sustain pedal function, which if implemented would only enhance the harmonic characteristics of the reed bar! Because of this, we designed a custom shop sustain pedal that allows this 106 piano to be played with a 200 series sustain pedal to bring the instrument to its absolute fullest musical potential. 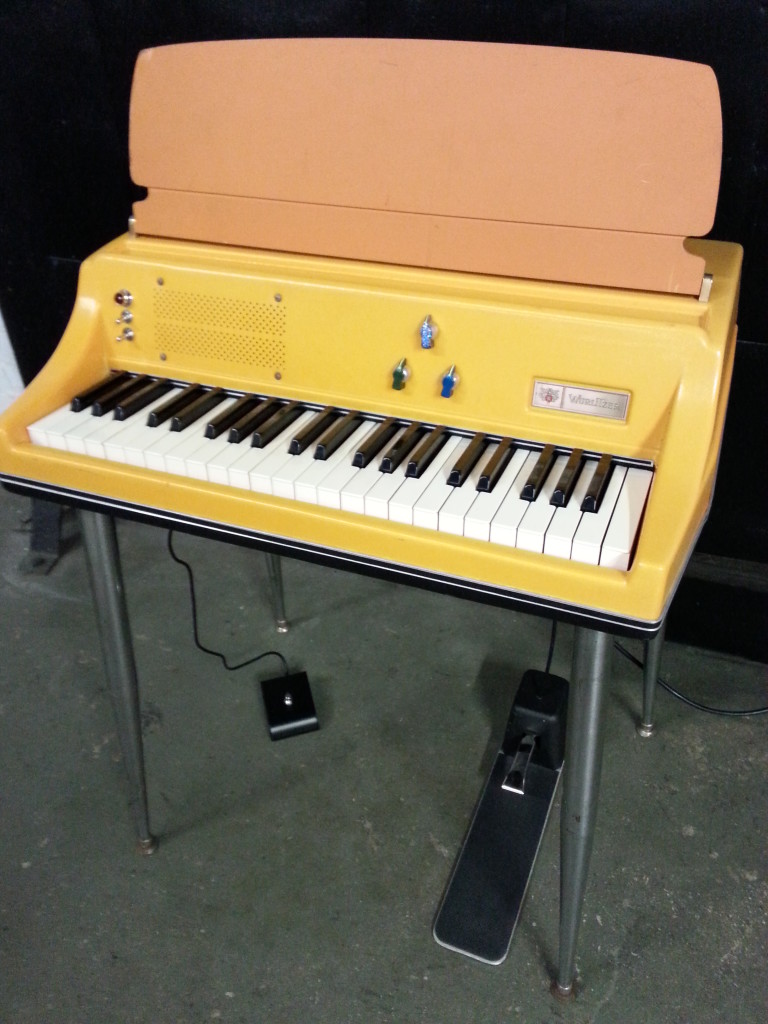 In addition to our custom sustain pedal design the piano needed a replacement amplifier to power its internal speaker which is normally powered by the power supply mounted in the original folding frame… So here is a sneak peek of our soon to be released custom Wurlitzer tube amplifier: 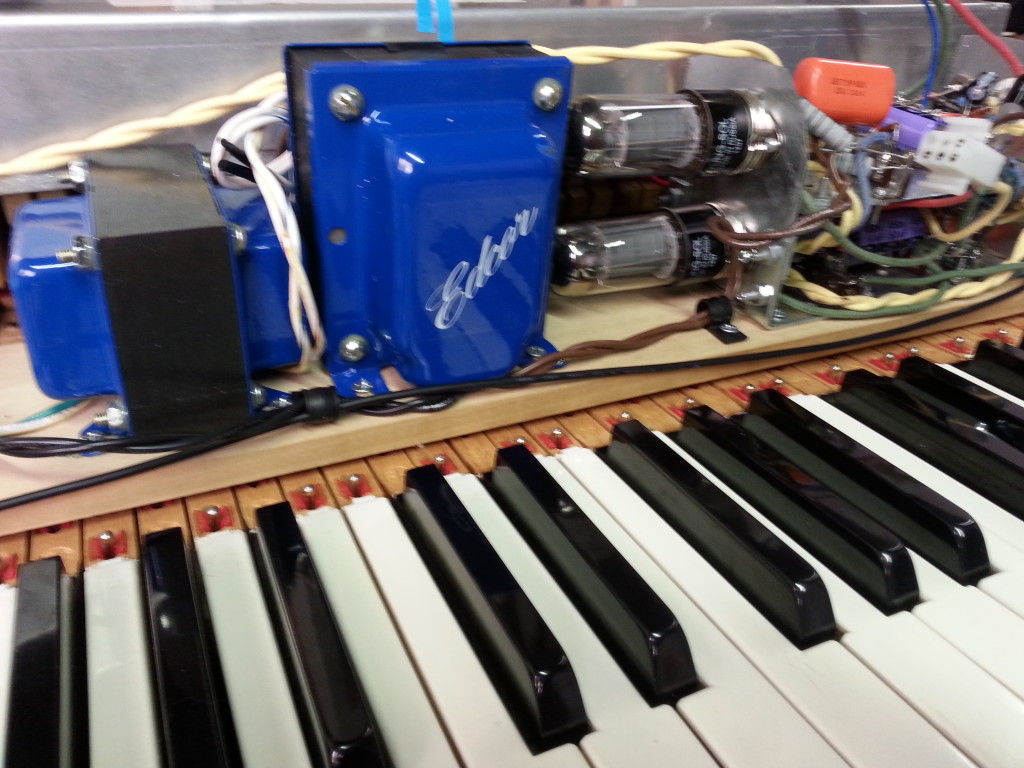 There are a few replacement amplifiers currently available for the Wurlitzer and ours is designed to be a breed of its own. Instead of simply trying to improve upon the original Wurlitzer design, which has already been attempted with various degrees of success, we set out to design an amplifier from scratch and emphasize the characteristics that are normally desired from classic vintage amplifiers. This meant designing an amp with tubes, grit, vintage vibrato, and just that certain color and charm. Our goal was to design an amplifier with the inspirational qualities that guitar players find when playing classic vintage amps like a ’50’s Fender Deluxe or early Princetons or bass guitarists plugging into a vintage SVT or Motown’s B-15N.

…So began the quest for the cosmic Wurlitzer amp. 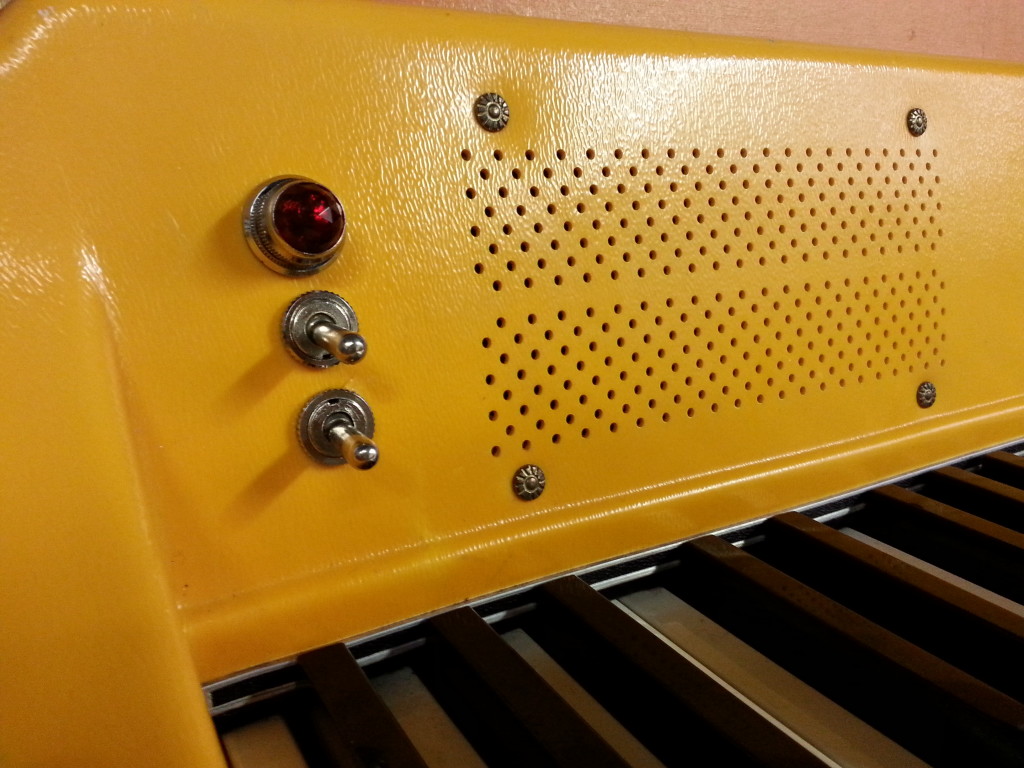 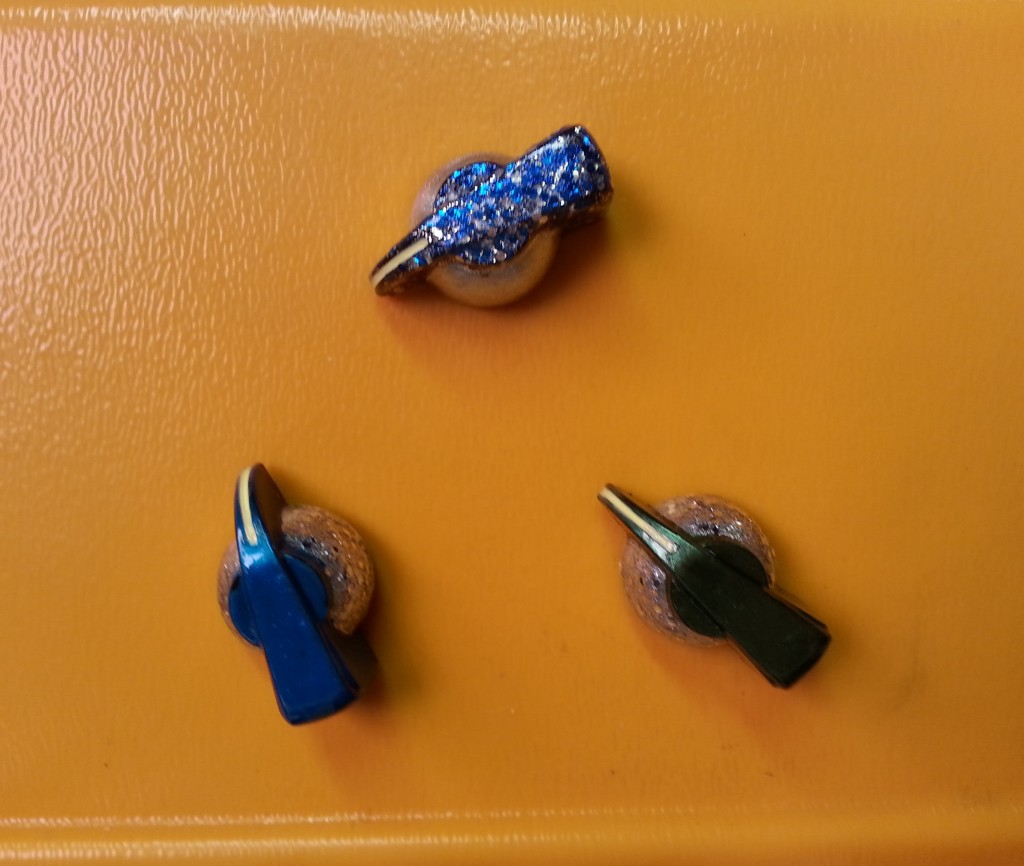 One of the other unique aspects of our amplifier was that it supplies the reed bar with nearly 300V instead of the typical 75-150V supplied by the other stock and other replacement Wurlitzer amplifiers available. The result is more responsiveness in the reed bar which also delivers higher fidelity. 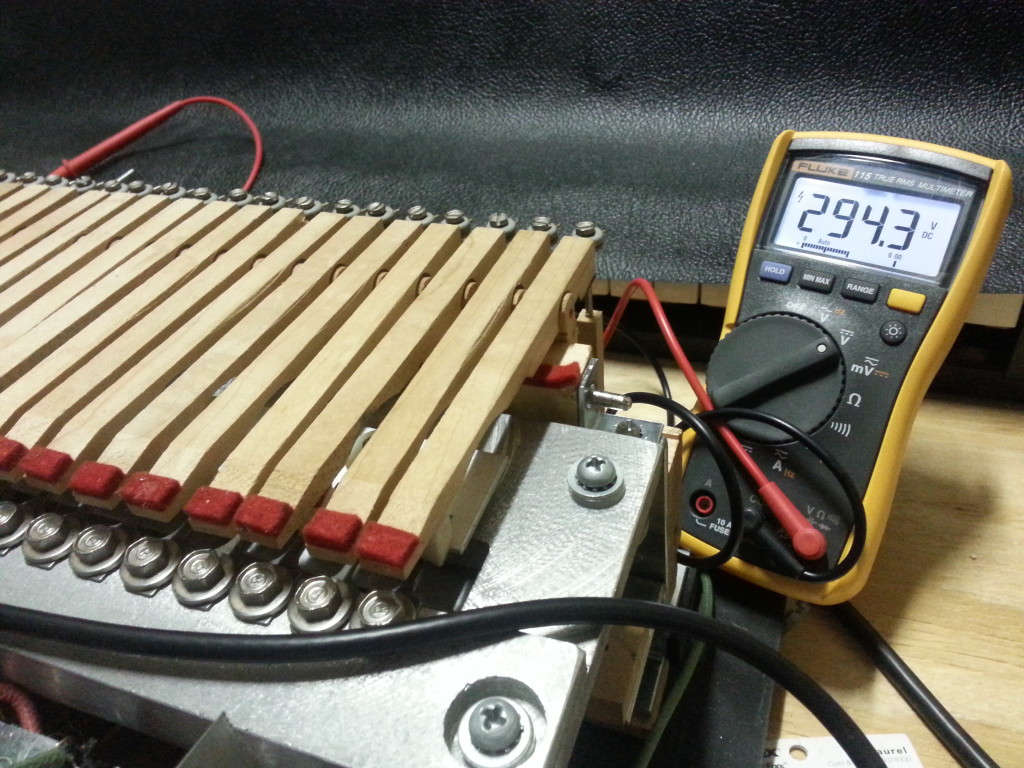 After experimenting over a year with various circuits implementing different tubes including working with 12AT7’s and 12AU7’s in the preamplifier before the finally fine tuning the 12AX7 to give just the right range of control over the grit and sparkle of the amplifier’s output. And boy does this amplifier have grit and sparkle! It brings the internal Wurlitzer speakers alive in ways that you have never heard! –Truly an inspiration!

The vibrato circuit also uses a 12AX7 and is modeled after the classic Fender Brown Face tremolo circuit. Unlike the original Wurlitzer amplifiers, this gives the tremolo both intensity and speed controls. We also added a tremolo foot-switch on/off switch which allows you to turn the effect on and off without the need to raise a hand or sweep down the intensity control.

In addition to the Custom Shop work we also restored the piano from the key bed up and voiced each individual note of the piano to bring this electric piano to better than new condition. And ‘amplified’ by the fact that our new tube amp does not have the muddy EQ found in most Wurlitzer amplifiers, which covers up the irregular noises and voicing irregularities, we also spent a considerable amount of our expertise getting the reed’s solder shape just right to avoid any unwanted ghost notes, hissing, or irregular wave forms. 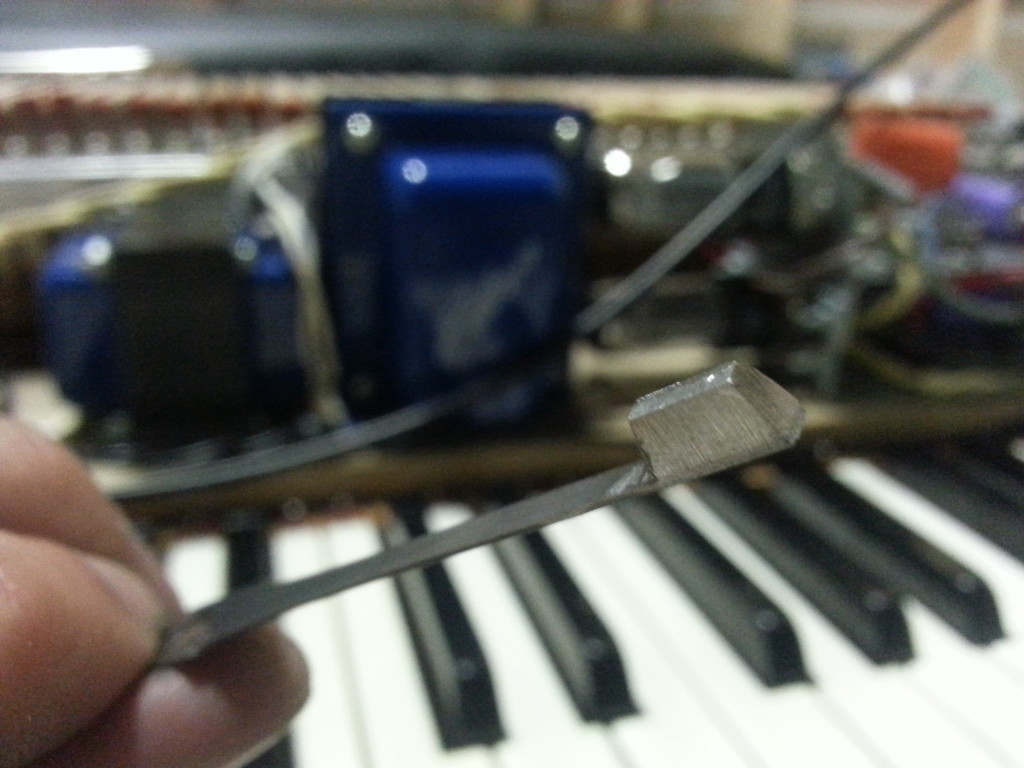 The importance of forming the proper shape to the solder tip of the Wurlitzer reed is an art form that cannot be overstated. The smallest irregularity, solder tab, or asymmetric imbalance can cause the reed to produce tones that are severely unpleasant. Even from the factory–particularly in the later years of 200A production, but also a commonly overlooked issue with throughout all production years–the quality control of the solder pyramid is not up to par with what is required of a Wurlitzer that is intended for live performance or studio use.

This Wurlitzer was refurbished with the proper craftsmanship and love to bring it to better-than-new condition. In addition to voicing each of the 44 individual reeds, every individual felt and spring was replaced with felts of the perfect thickness to ensure that the instrument can be regulated properly for a buttery-smooth feel and reliable dynamic play. You will have to play one for yourself to believe just how good our Wurlitzers sound and feel! 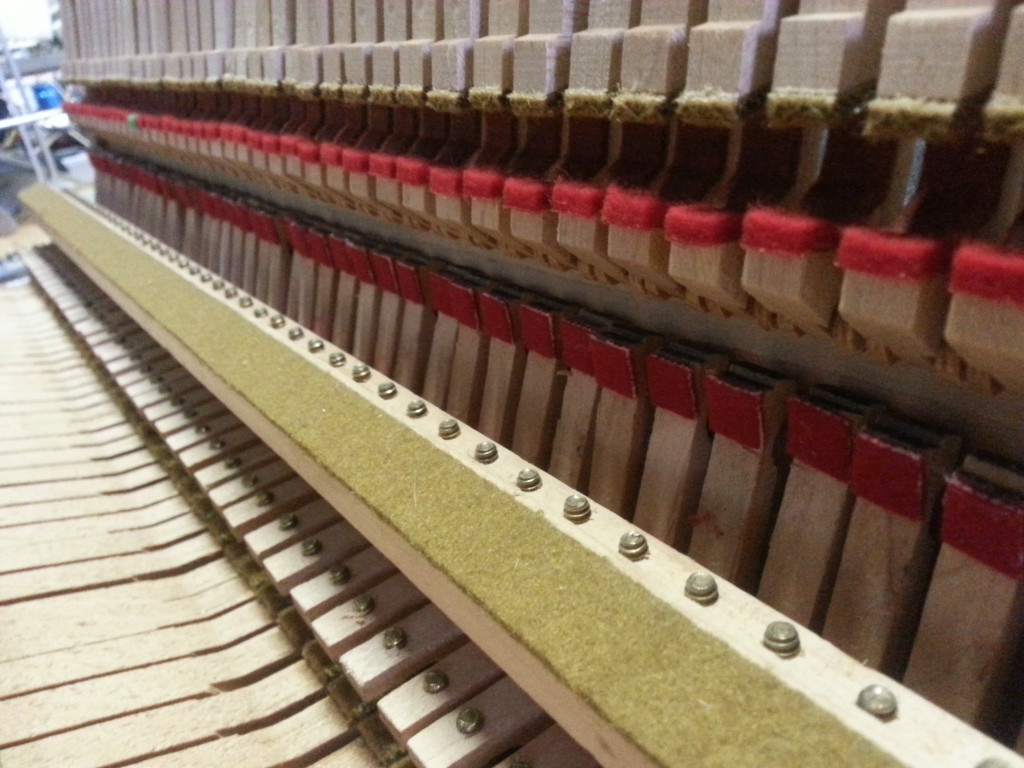 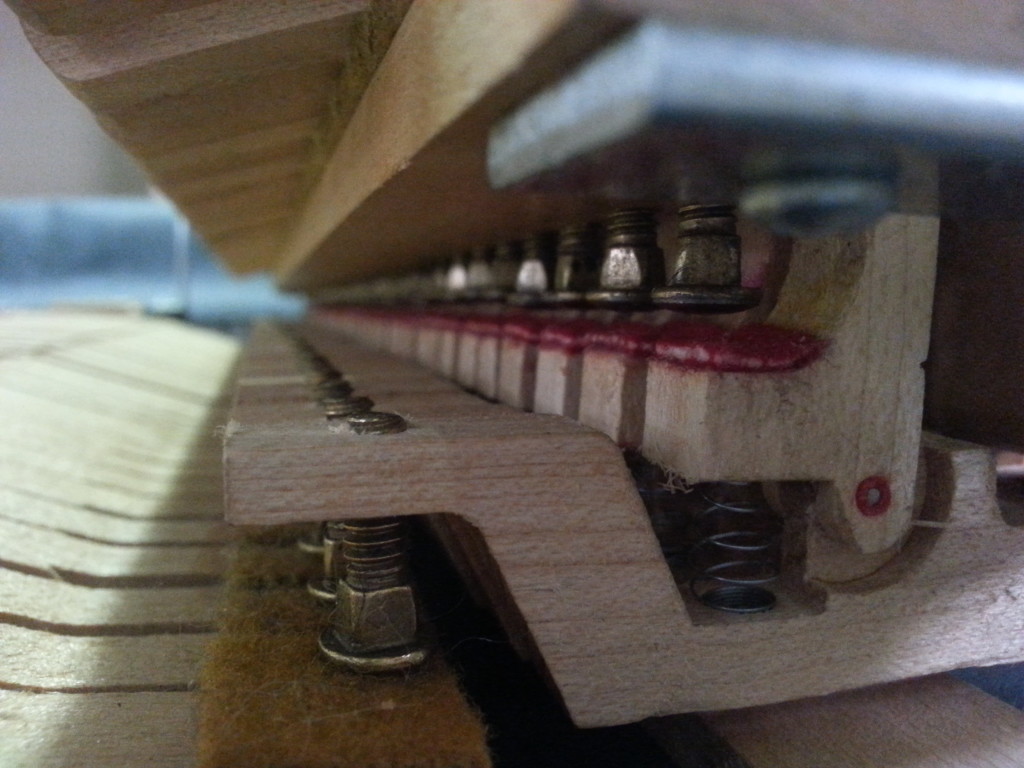 The key bed was completely leveled while lowering the black keys and regulated for a uniform 13/32″ across every black and white key. 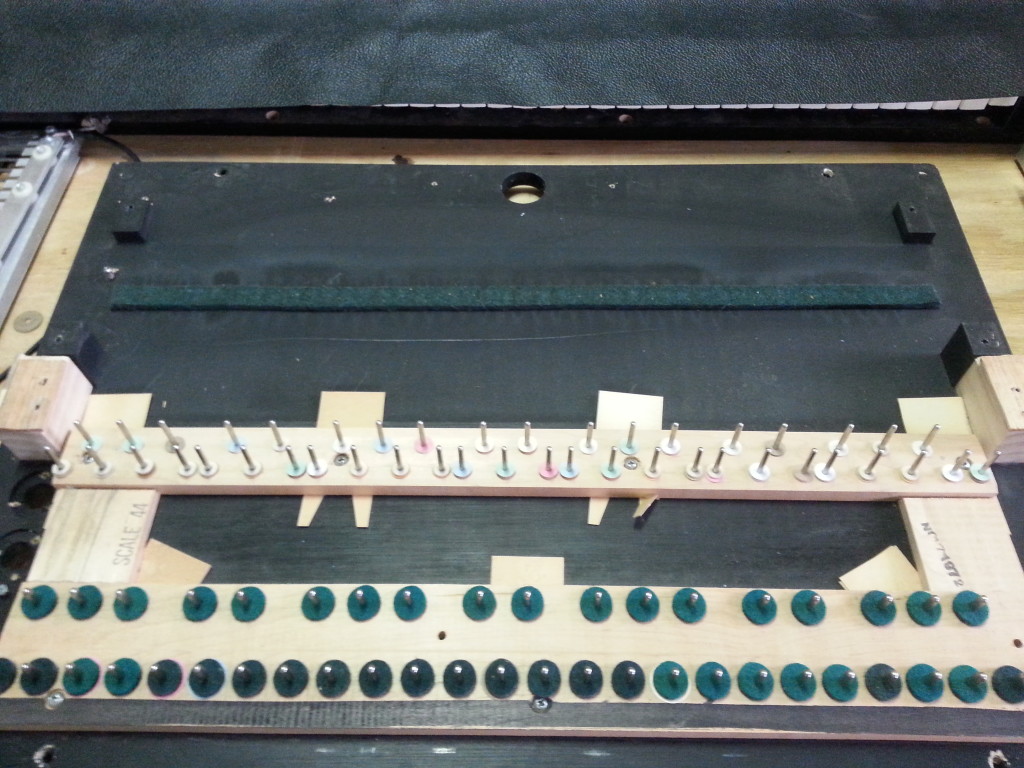 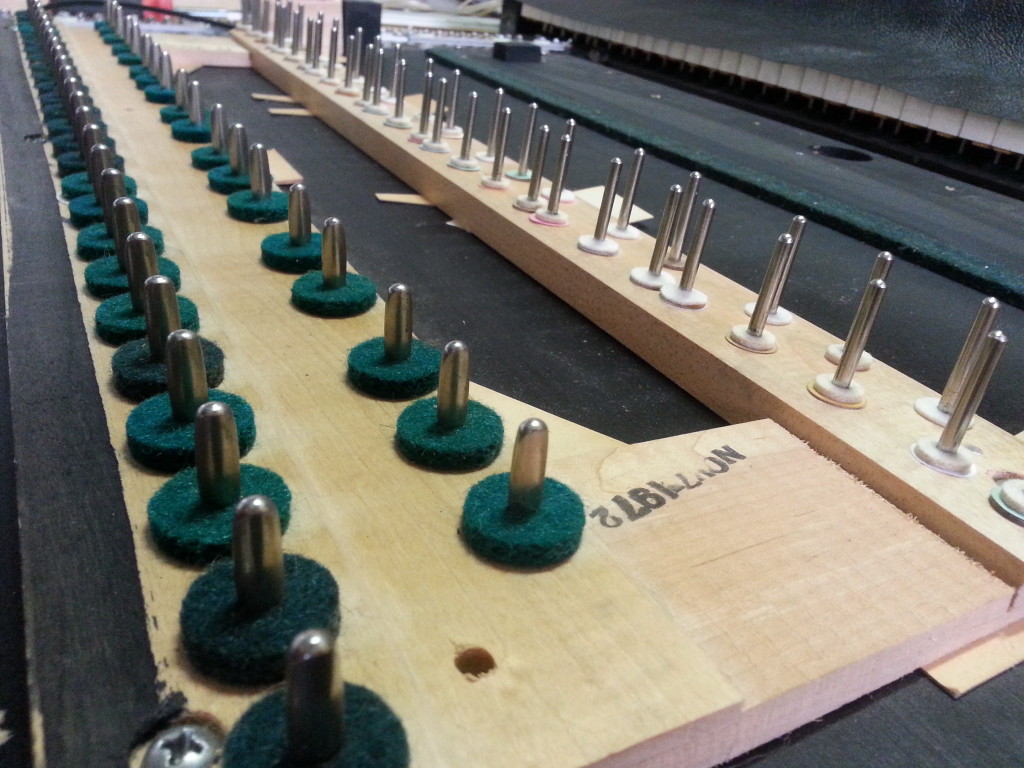 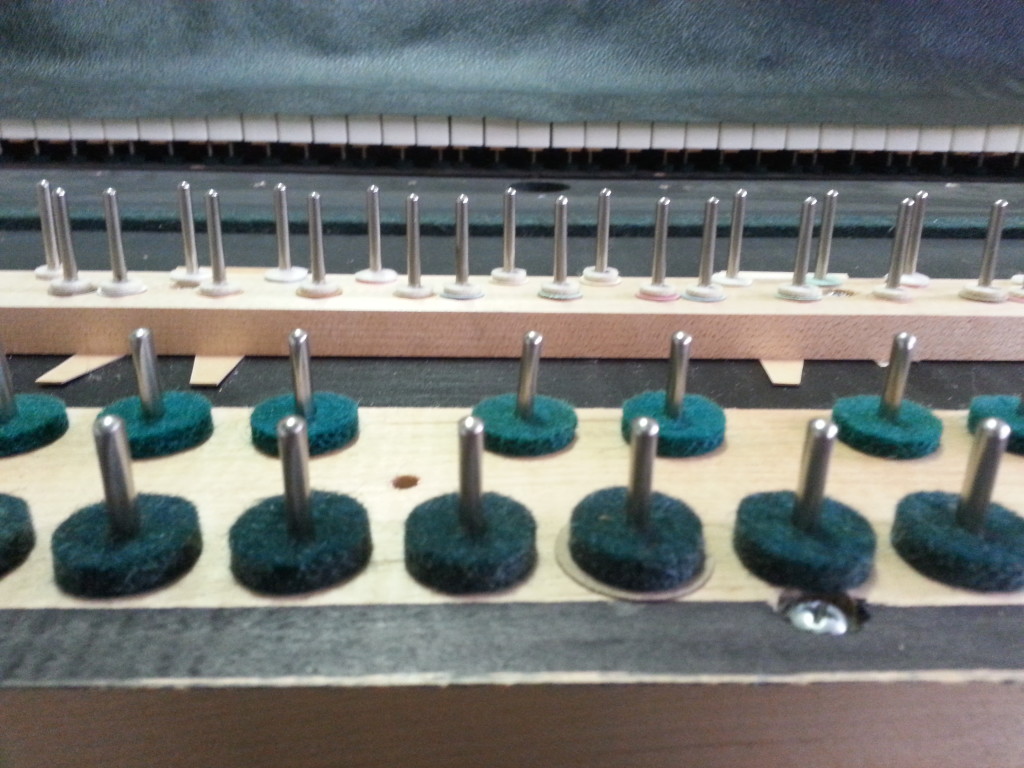 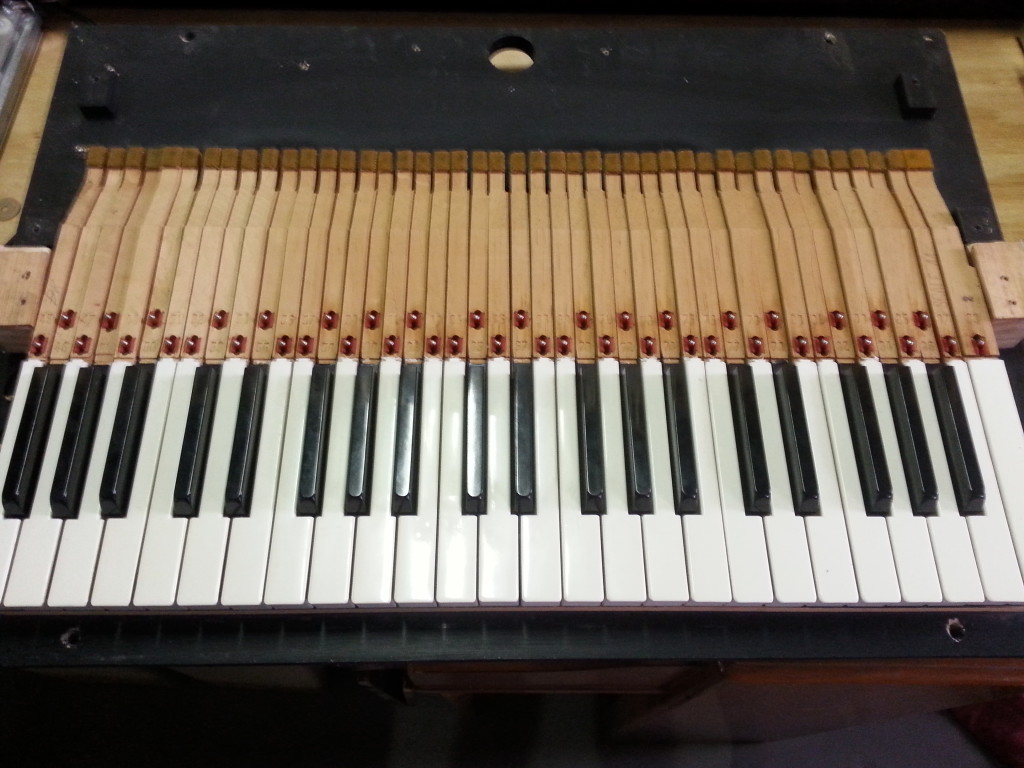 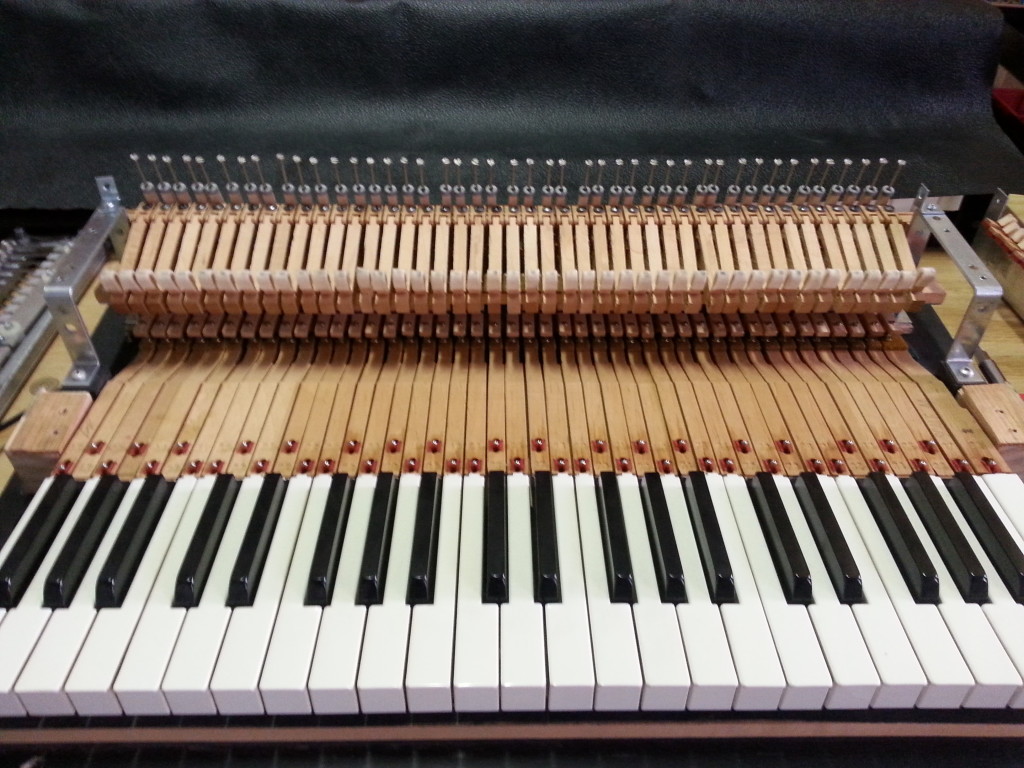 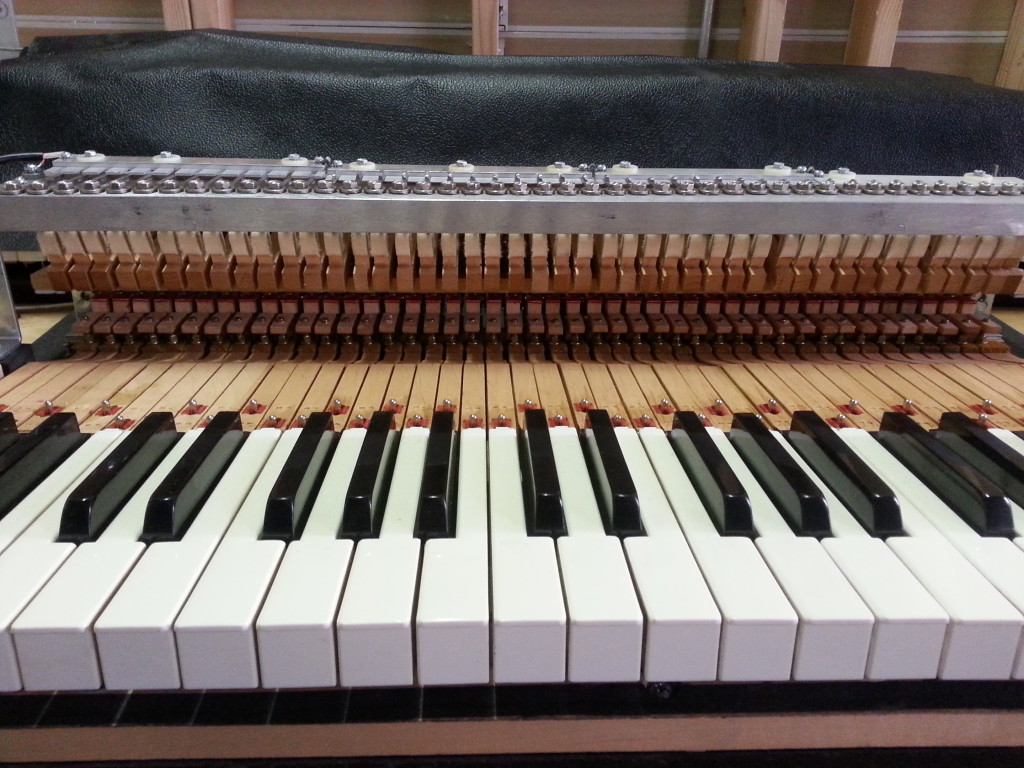 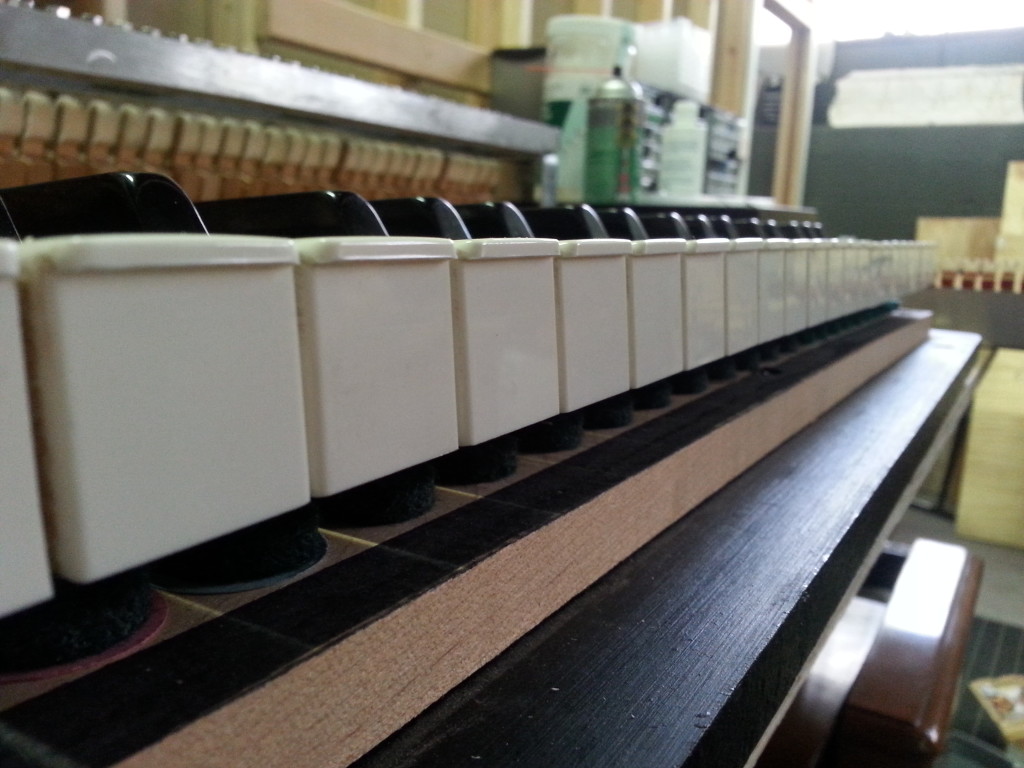 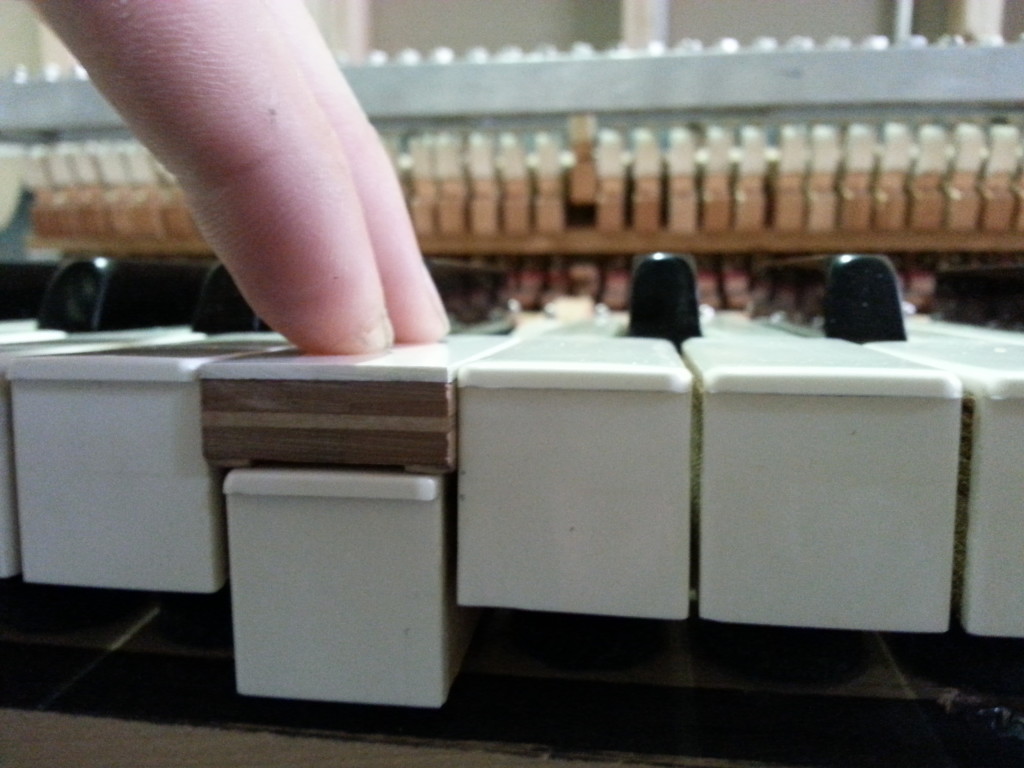 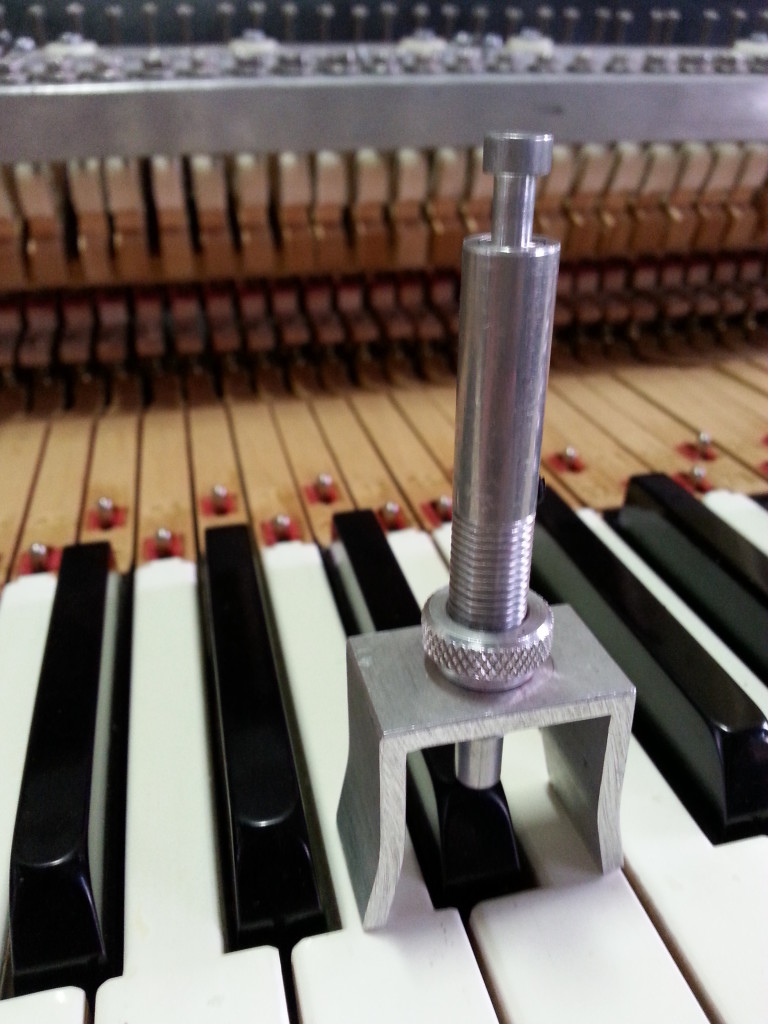 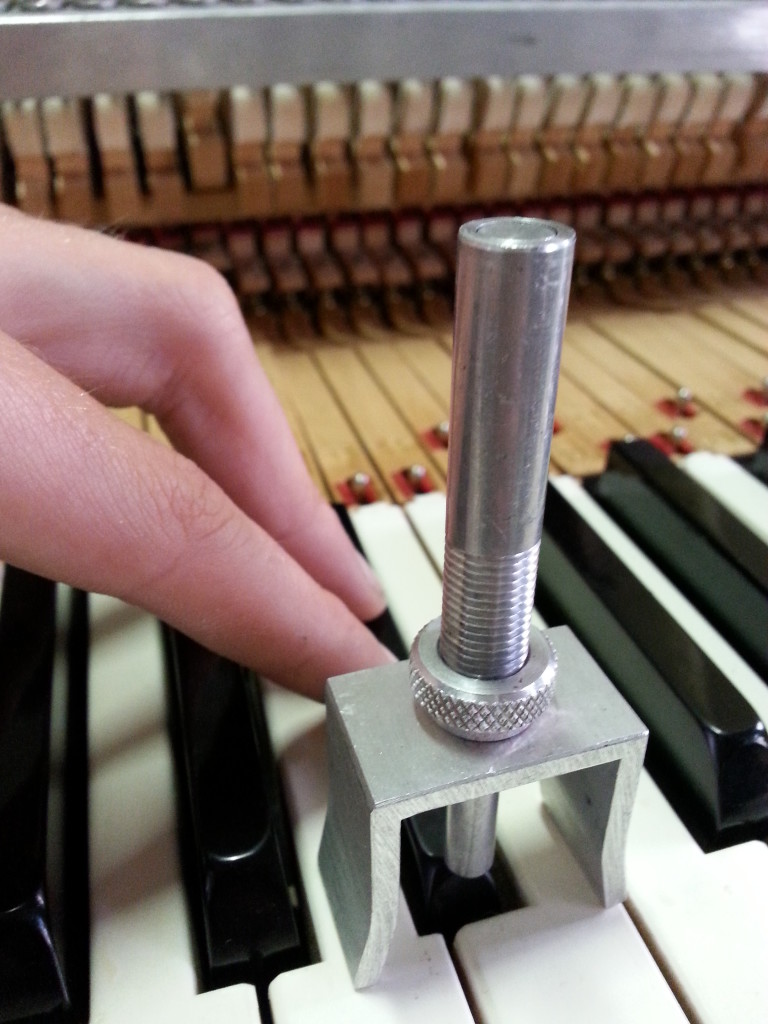 From this foundation, once we built up, leveled, and regulated the key bed from scratch we can begin to perform the same tasks on the action assembly. After carefully selecting the proper thickness felts and springs to refurbish the aging action components we then regulate it for lost motion and let-off to insure that the instrument plays with a reliable and expressive dynamic range. 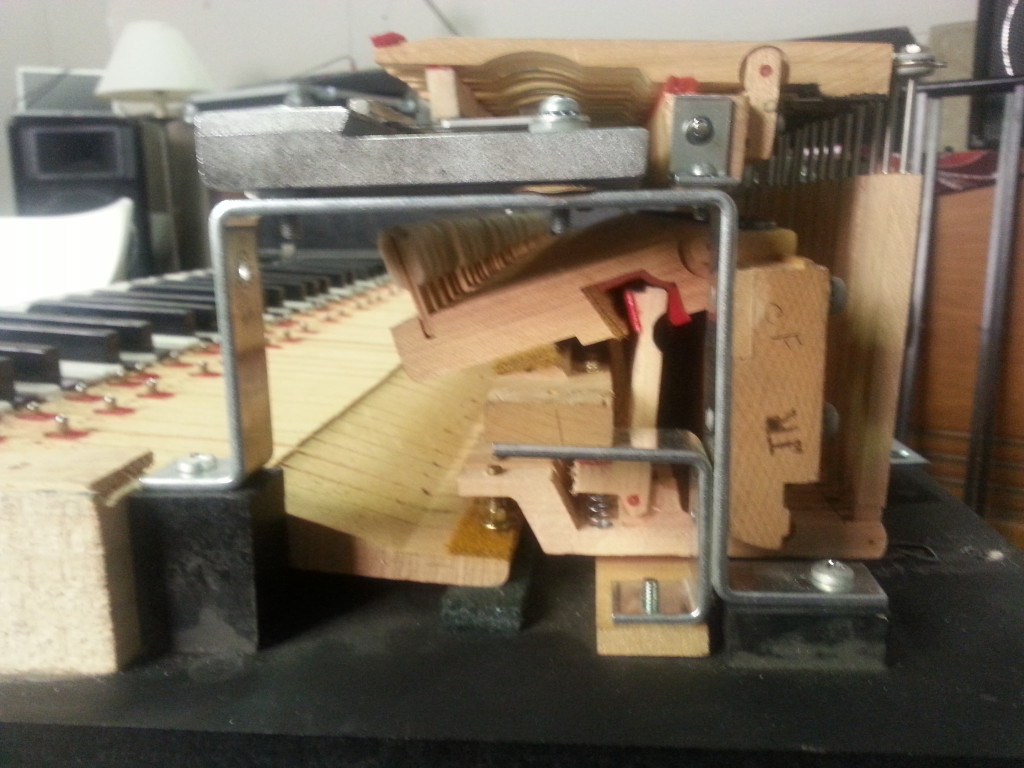 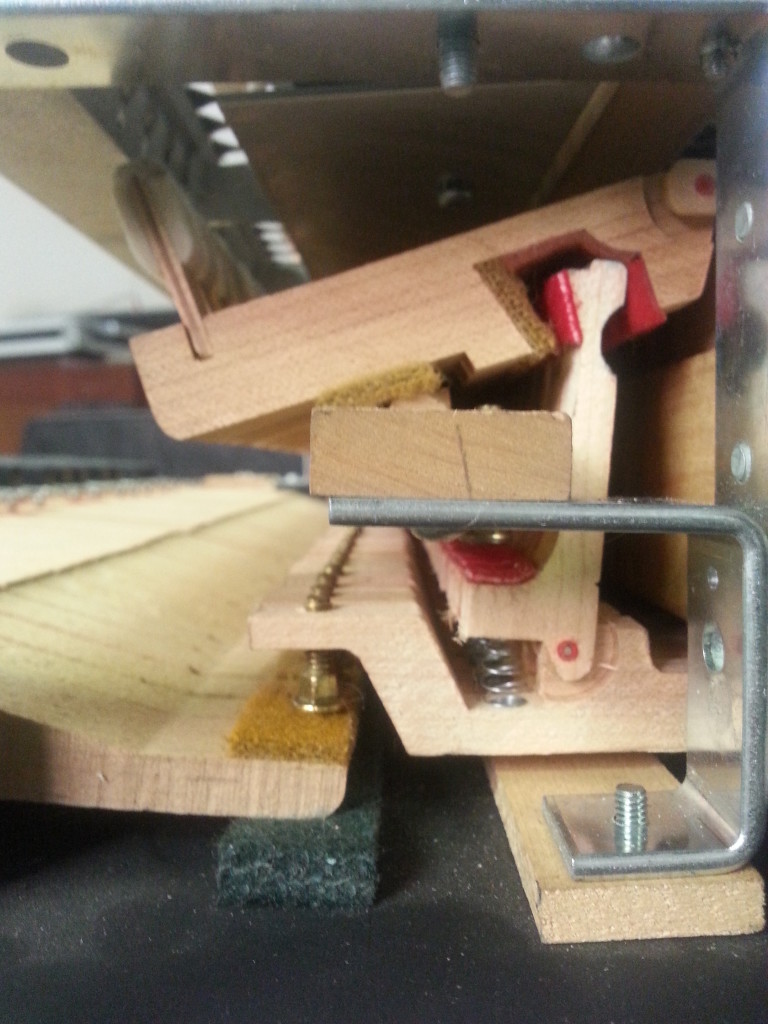 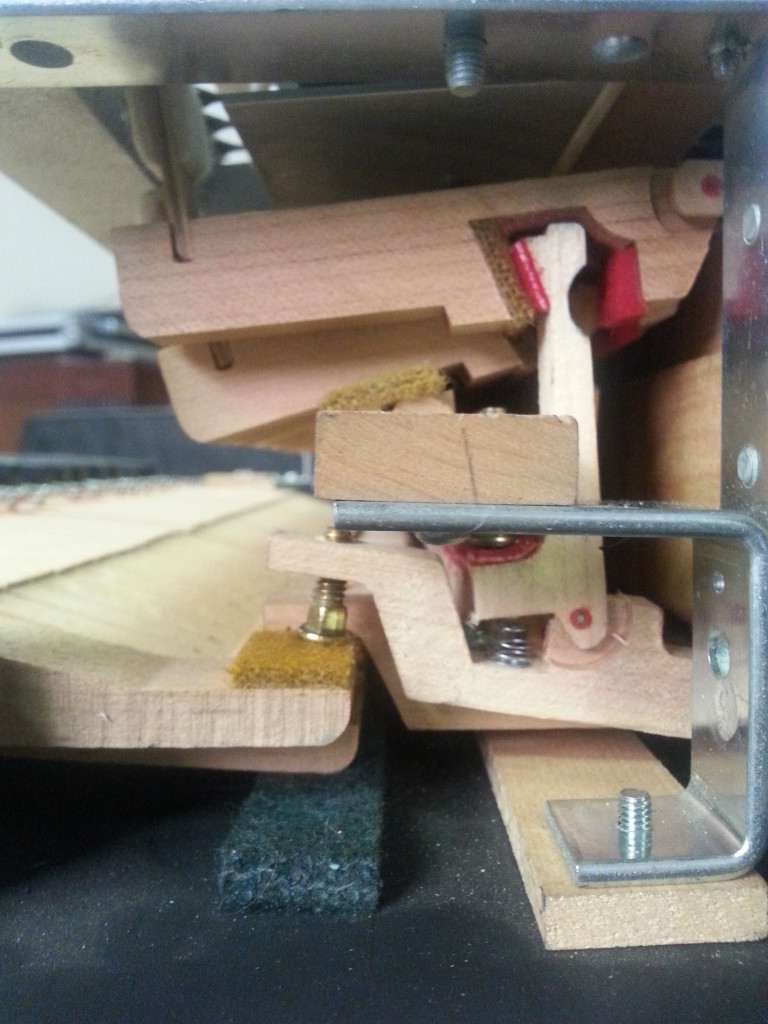 This is as close as you can get to a brand new Wurlitzer in 2013. In fact we have taken the craft to a level on this piano where we can confidently say that this Wurlitzer is in better condition than the day that it was born right here in Dekalb, IL in November 1972. 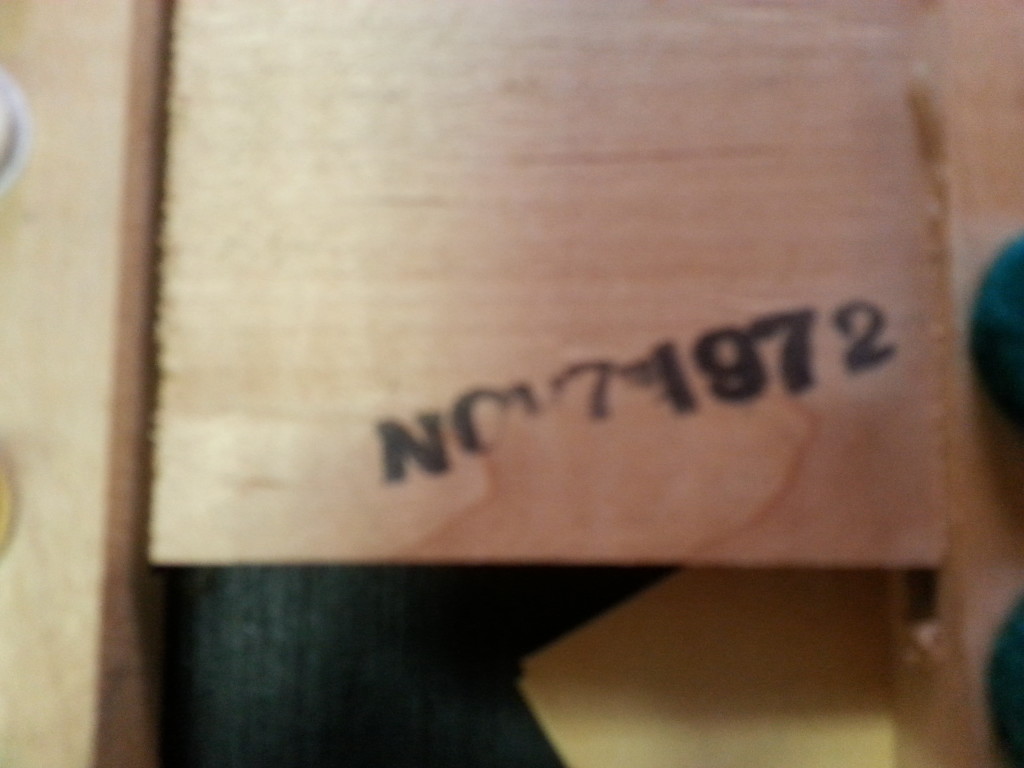 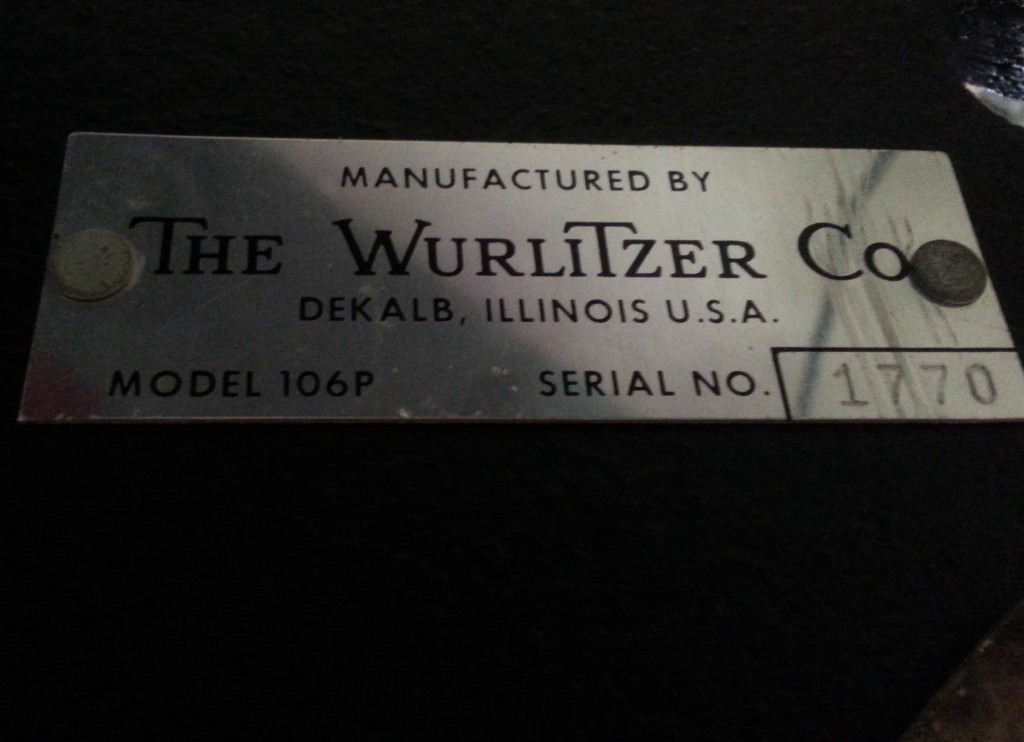 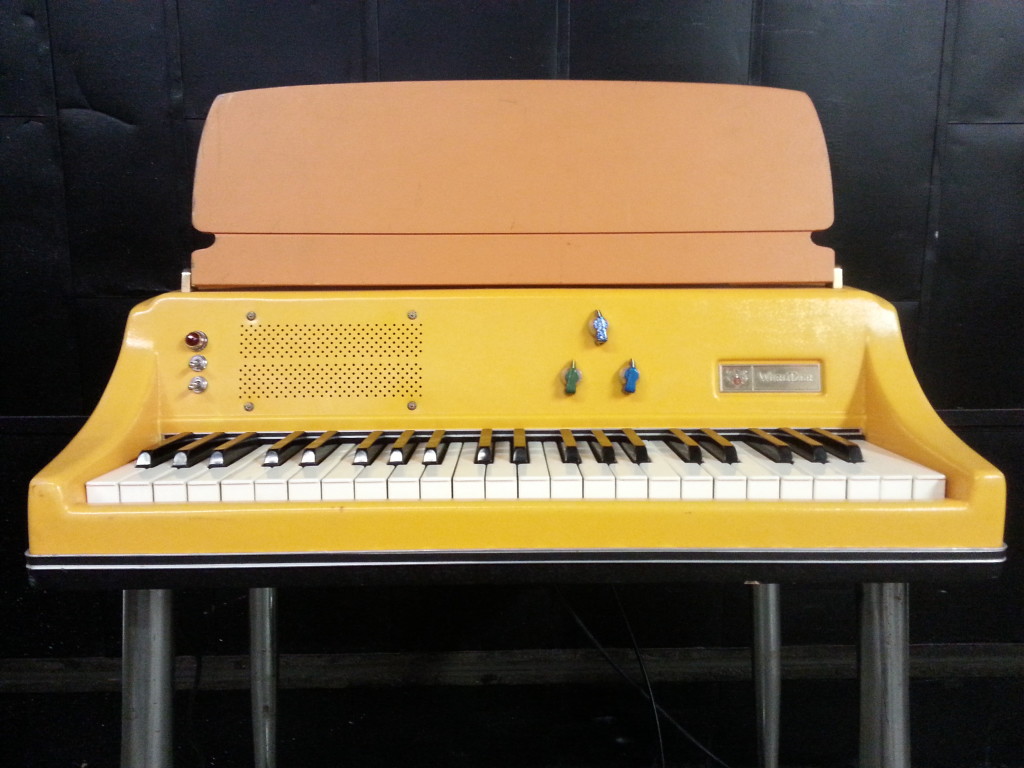 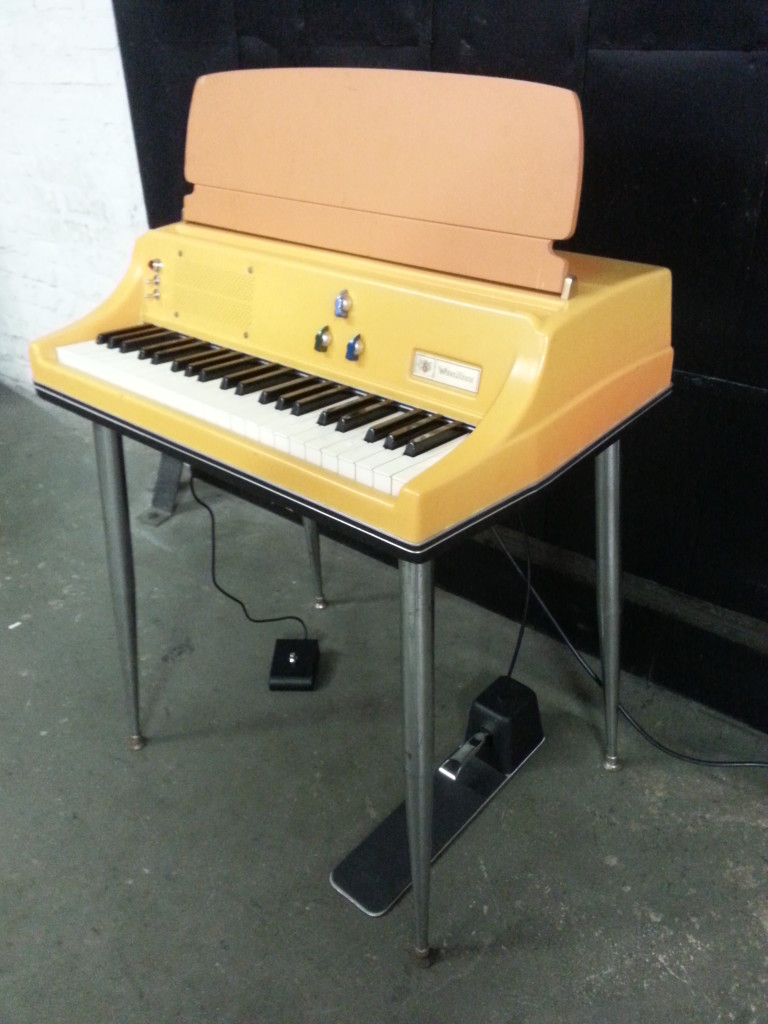 This one already turned a lot of heads at the warehouse and it will hopefully catch more attention now that it is back home at Wilco’s Loft along with good company. Hopefully we will be hearing from this one again soon!

…One down, seven more to go!